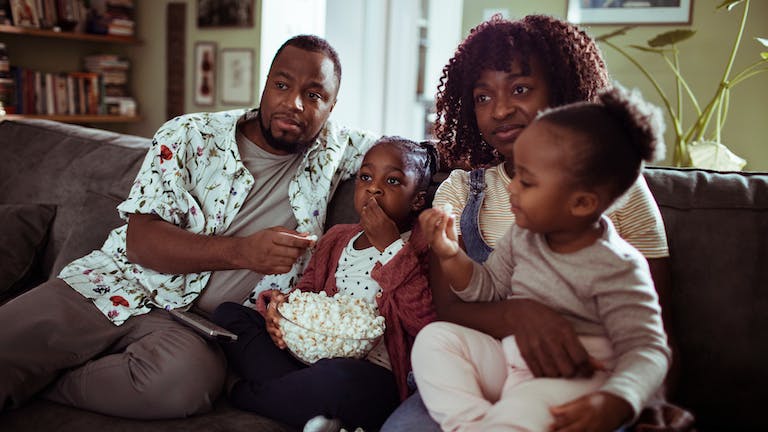 As new streaming video services continue to launch, and existing stalwarts battle with compelling newcomers, we continue to see shifts in the market. With some of the novelty to the service wearing off, consumers are now looking to find their optimal mix of services. And with more choices, and an incredible ease to switching, churn is inevitable. Retaining existing subscribers while growing will be paramount to ensure profitability as this industry matures and approaches saturation.

Netflix, Amazon, Disney+ and Hulu continue to lead (and all are beating Cable), but is there room for others as consumers seek a limited number of services? More subscribe to YouTube TV than Peacock or CBS All Access/Paramount+ – will that continue, or will the relative newcomers find more traction?

ENGINE’s CARAVAN service interviewed 1,000 people last week and found that in the past 3 months:

That’s a lot of churn. There is plenty of trial – which can be expensive customer acquisition – but most importantly, does it stick?

Based on what we heard last week, the larger players continue to attract subscribers at the highest rate: 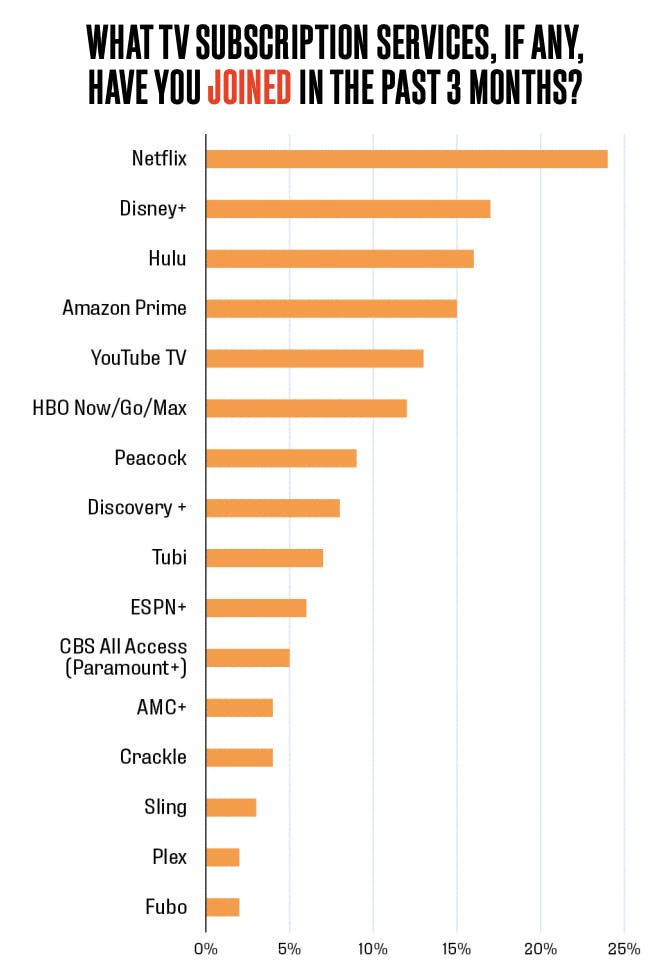 But we also see a higher percentage of cancellations across Disney, Netflix, Hulu and Amazon: 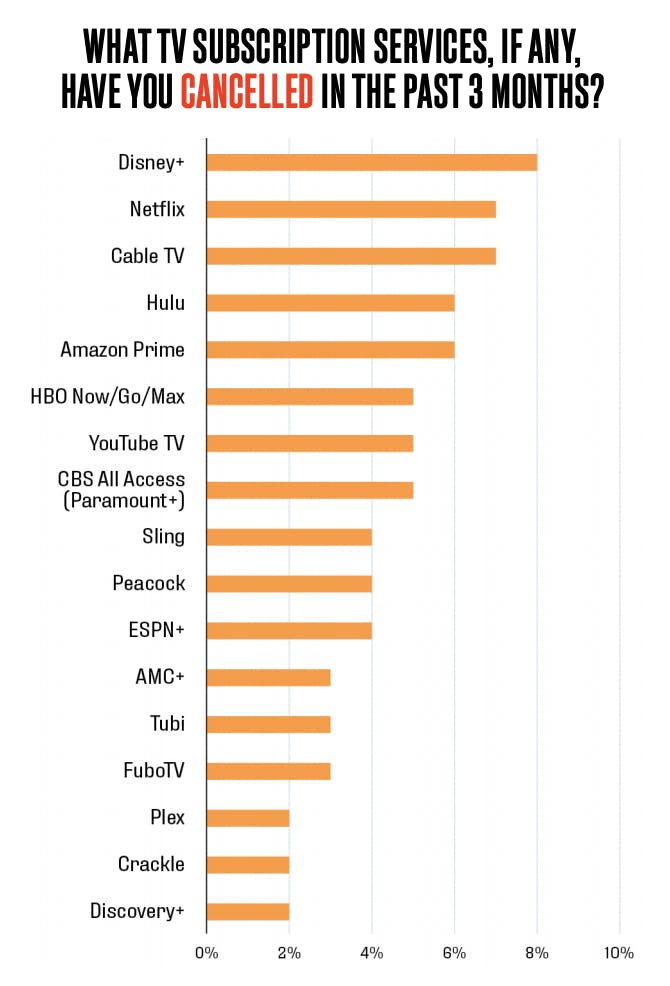 Taking a longer-term view, a similar number of consumers claim “I had this service in the past, but no longer have it” for Netflix, Disney, and Amazon – all are between 14-16%. HBO should be more concerned, as they have a higher churn rate – 25% claim to be former subscribers, while 24% currently have the service.  Lastly, Sling is most notably ‘upside down’ on these metrics – with 9% currently subscribing, while 14% are former subscribers.

What Draws New Subscribers In 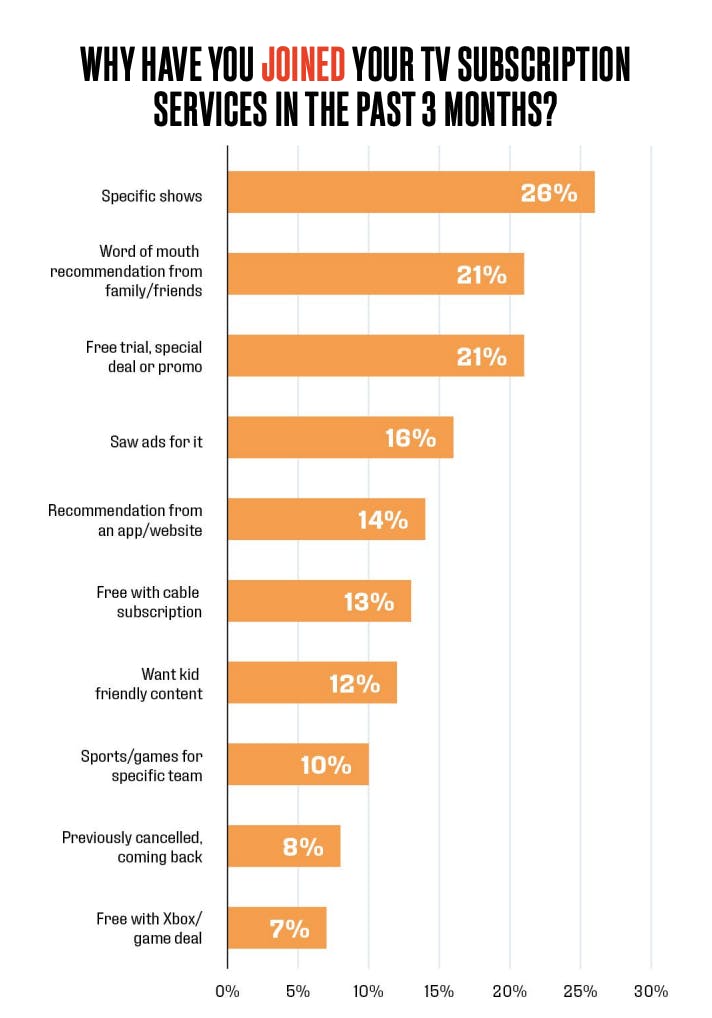 There is an interesting mix of drivers across the services. Netflix grabs people more from word of mouth (28%) and for specific shows (25%); Hulu is similar at 27% and 25% respectively. Disney+ subscribers are more driven by content at 29%, while Amazon is both content & free trial/deal with both at 27%. CBS All Access (44%), Discovery+ (41%), and HBO (35%) are the most driven by specific content, leaving them with the greatest challenge to continue to compel subscribers to stick around even after that initial content of interest has been exhausted.

To explore this further, we’ve asked ENGINE’s Voices on Demand Hive community every week about what services members have added/removed and why. Here are some sentiments we heard from our viewing community:

“I added CBS All Access because I wanted to watch the new Star Trek series.”

“I added Peacock because I wanted to see the remake of Saved By the Bell.”

“I added AMC+ because Discovery of Witches season 2 starts this weekend.”

Why Are Subscribers Cancelling?

While free trials and deals are compelling consumers to try a new service, it’s harder to get consumers to stick with it. Consumers tell us the top reasons for cancelling are price and the ‘end of a trial’. 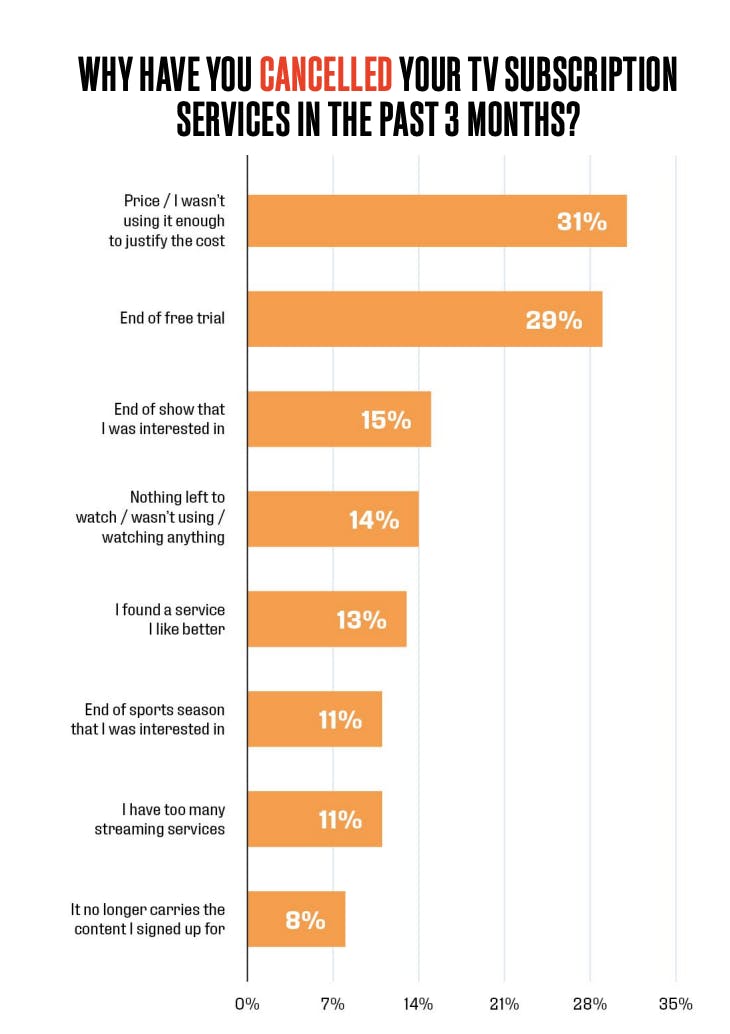 Of course, many of these reasons are ultimately related to content – e.g. when a cancellation happens at the end of the free trial, there is an assessment that there is nothing else to watch, or it isn’t worth it compared to other options.

Similarly, the end of sports season is cited by 31% of recently cancelled Fubo subscribers.

A few notable exceptions include:

Further, some of what we heard on ENGINE’s Voices on Demand Hive community, in addition to a number of comments echoing that there is “Nothing left to watch”, further support price and content as the key drivers:

“Amazon Prime lost access to Chicago PD which I wanted to watch (went to Peacock).”

“There isn’t enough time in the day to watch all the content on Netflix and Prime.”

“My month was up w HBO Max and I have too many services now.”

“Finished the Stand and free trial was up, not enough content to warrant fee (CBS All Access).”

The increased churn is likely to continue. As we become more hopeful for an end to COVID lockdown and the resulting decrease in time on the couch, as economic struggles unfortunately continue for some, and as consumers push to overcome the inertia of their subscriptions, we expect to see further rationalizing of the streaming service ‘portfolio’ each house is willing to hold. Consumers should be expected to continue to react to word of mouth for ‘must see’ shows, and to free trials, but they may be short lived subscribers if they come in for free for a narrow interest.

As we heard in our Hive:

“The nice thing about streaming is when COVID restrictions are eased, and we can return to outside activities and socializing, you can just eliminate the excess expense of the streaming. And by then we will have a very good idea what is worth our dollars.”

“This is what cable gets wrong – they keep raising prices, pushing people to streaming services. If streaming doesn’t watch out, they may find they get replaced as well.”

“Looking to downsize, talking about it; haven’t done because I am too lazy.”

Ensuring new subscribers are kept engaged and therefore remain will be critical to sustain growth, and investment in content. Some action to take includes:

1. Confirm understanding of your subscriber base: who you are most likely to conquest, and why. With 2/3 of subscribers preferring to binge watch, ensuring the next show is easily queued up will help retain subscribers. We have found the following reasons for checking out a new show, suggesting this is more than a simple UX issue: On the other side, reducing cancellations requires a depth of knowledge of why consumers are leaving and what could have stopped the departure. All services are awash with behavioural data, which helps tell this story, but speaking to consumers as well will help better understand the ‘why’.

3. Bundle: Some services are better positioned for bundling, which helps address the price/content mix. With individual shows second fiddle to price, larger organizations like Disney can look to expand subscriber growth with adding to the family’s lifestyle offers (Hulu, ESPN+, and Disney+ package) – overall price savings and a diversified content pool. Other bundles that should benefit include AT&T/HBOMax subscriptions.

4. Further develop loyalty programs or exclusivity: as one Hive member suggested “They should offer an incentive for our loyalty”. Perhaps Disney could connect this to the park or retail experience? Help consumers feel like VIPs, provide exclusive early access or exclusive content, or reward loyalty with upgrades that are meaningful to viewers – remembering that meaningful will take on different definitions for different people.

ENGINE’s CARAVAN survey services and Hives Voices on Demand are available to dive into these issues for you, with answers in days for a minimal investment. If you are unclear about your subscriber segmentation, path to purchase, or drivers and barriers for retention, we’re here to help.

Want to find out more about our ENGINE CARAVAN solutions? Contact us now!